GSuite is evolving to Workspace, so prices and TBs too

Im on workspace enterprise for me its 20$usd a month (unlimited storage) I have around 30tbs in there for 3 months now. + team drives also if your into that.

may i ask something?

I have gsuite business and i have my data on teamdrive if i switch to Business Standard my data will remain? and how is the space limit on teamdrive?

i understand for Business Standard my gdrive is 2TB x users i have on my subscription..
is that right?

if i switch to Business Standard my data will remain?

Yes, you are not loosing your data.

for Business Standard my gdrive is 2TB x users i have on my subscription..
is that right?

Yes, this is correct. GSuite Business and Workspace Business Standard have, in this moment, the same pricing (here in EU).

i spoke with support and says that if i get business standard i will have 2 TB and Teamdrive will be 2 TB and not unlimited.. so i must go to enterprise standart i think

Thank you for your suggestion, I just did the transfer from Gsuite Business to Workspace Enterprise Standard and it's working, drive allocation is the same as before only the price is bit higher. But it's still UNBEATABLE

I'm running Workspace Enterprise Standard with one license and got unlimited space. Checked with support when signing up and they told me it should remain unlimited. Pay $20 per month, so ends up cheaper than Dropbox which does require 3 active licenses.

I just filled in the form to be contacted by the Google Workspace Enterprise sales team and, just after clicking the "submit" form, I received a mail from Google saying that i will be contacted soon. Also it says that the subscription to Enterprise will include 5 TB of space each user.

Just to understand: the unlimited is dedicated to existing Suite users or it says unlimited here and 5 TB there to eventually limit the space in the future???

But in the end its not officially unlimited for 1 user. It was not official while it was gsuite and its not now.
Hopefully it will stay this way, as i am in the same situation now and will just take the enterprise standard plan.
Was looking for 2 people sharing dropbox for an official unlimited plan, but actually i think that with google unlimited means unlimited and with dropbox you will be kicked is you use it to hard, but thats just a feeling based on the size of google compared to the size of dropbox.

I remember when I moved from Amazon Cloud Drive (from 70 €/year to 70 €/year for each TByte) to GSuite Business: the specs were saying that it was unlimited for 5 or more users... but this forum was saying that anyway it was unlimited and in my Google Account, even if I have just 1 user, it says UNLIMITED.
Now it seems the same story: I asked to Google support and they say that Enterprise is unlimited and I should move from GSuite Business to Enterprise Standard. If I tray to move to Enterprise from my Google Account page, it says again UNLIMITED, but Terms and Conditions are saying it is unlimited for 5 or more users.
Could it be unlimited just for users moving from GSuite Business?
(To be honest, I really DO NOT need unlimited... I am using about 8 TByte and let me say... 10 TByte are more than enough)

Based on what support told me it will stay unlimited even for 1 users. Their pricing comparison says all space you need and doesn't indicate a minimum of users: Google Workspace (formerly G Suite): Pricing plans

If you have any reference where it indicates there's a minimum user requirement please share as a lot of people (including me) are planning on using Google for their file management.

Thats not correct and i dont think that this is what the support said in detail.

[Email, document, photo storage per user]: As much as you need*
*Requires 5 or more users (1 TB if 4 or fewer users).

It was like that from the beginning, but they didnt enforced the 1TB. Nevertheless it could change if more and more people using it with only 1 user and a lot of space used.

If you backscroll in the post, lots of folks are using it with unlimited with 1 user including myself. It's the same way that the previous was as regardless of what it says, it's unlimited now.

Can that change? Sure, but for now it's unlimited like before.

@Animosity022
i do not understand the point to repeat that over and over again.
On the quite its unlimited, officially its not as everyone of us can read in the google terms.
Thats the only thing i was saying, its not offical and could be enforced everytime as the terms saying that you will get 1TB and nothing else.
Nevertheless i will use it anyway like the way before.

everyone who likes to have an official way need to lookl for a group of 5 on gdrive or a group of 3 with dropbox.

Thats the only thing i was saying, its not offical and could be enforced everytime as the terms saying that you will get 1TB and nothing else.

That's how it was before as it was not enforced on the user limit so it's the same.

everyone who likes to have an official way need to lookl for a group of 5 on gdrive or a group of 3 with dropbox.

You don't "need" 3 people on dropbox either as you just pay more for the storage.

What you are saying is just not correct as it does not require 5 people for unlimited now as many folks have posted screenshots of using unlimited storage without 5 people.

Thats not correct and i dont think that this is what the support said in detail.

You are confusing GSuite and Workspace plans. Workplace Enterprise offers unlimited storage and nowhere does it say you need at least 5 active licenses. I confirmed long time ago with support. They might eventually bring some requirement in, but so far it's officially available for one license. When the change was announced and there was lot of coverage some media outlets even confirmed the same as they also use GDrive to archive their raw footage etc.

Regardless of any official or off the record ability to store unlimited data, it's always smart to keep backup of your data on either another service or offline location as terms can quickly change and could result in data loss.

What i am saying is definitely correct only that i used "persons" instead of "users" is in fact wrong, in that point you are correct.

So if you like to have "as much as you need" storage you will need to pay 5x20USD/Month=100USD/Month for gdrive and 3x20USD/Month=60USD/Month for dropbox.
and thats it.
For now, google is not enforcing the user minimum as we all know, but its officially only 1TB if you have only 1 user for 20USD/Month - if you dont understand it at that point, i cant help you anymore, but you can find that conditions in the link i was posting before.

No i am not confusing anything. In the "Current" Link you posted is neither a user limit nor unlimited (Or "as much as you need") storage mentioned.

Workplace Enterprise offers unlimited storage and nowhere does it say you need at least 5 active licenses.

You have a minimum of 5 Users for Workspace Enterprise Standard for "as much as you need" storage.
And you find those details in the link i was writing before Compare Enterprise editions - Google Workspace Admin Help
Pretty easy to understand actually - they just not enforcing it, thats all - doesnt mean that is it not against the terms of use or anything else.

You aren’t helping me as much as confusing other folks. I and many others have 1 user as that’s the point you don’t understand.

lol, its getting funny.

you are the only one who is actually confusing anyone as after reading those posts one would think its officially legal to have unlimited storage with only 1 user.

i always said, that you can use unlimited storage with only 1 user but its just not official and 1tb per user could be enforced everytime. (if you are below 5 users)
i am using it that way for years now with more then 1tb...
Everyone need to keep that in mind and there are people out there who rather would group up instead of spending hours and hours in transfering data, downloading, uploading again etc. if google is deciding that the people need to stick to the contract they signed for... 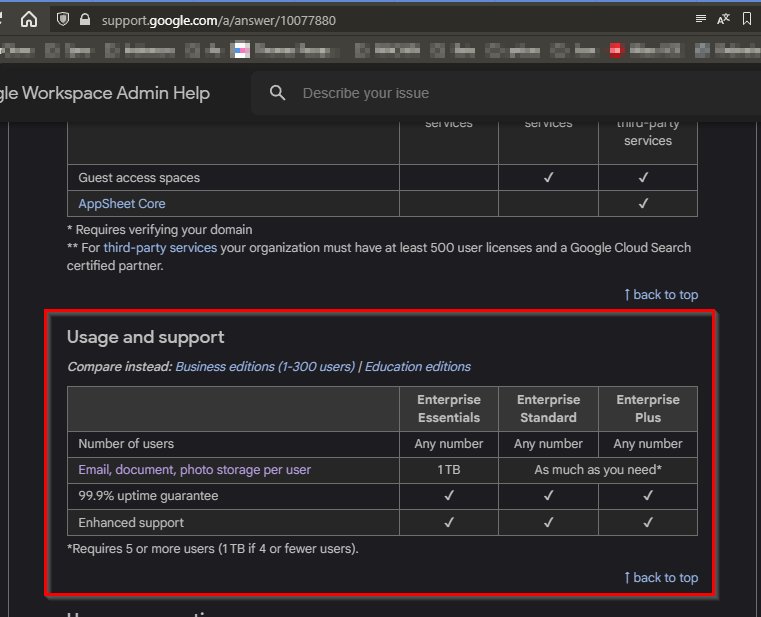 That beeing said, you can actually store whatever you want on you GDrive with only 1 account:

GSuite is evolving to Workspace, so prices and TBs too Off Topic

It's not up to me to read back this thread to give you answers... TL;DR Sign for or migrate to any plan you want, then, in your Workspace account migrate to the Enterprise Standard plan. With unlimited Gdrive storage (+ teamdrives). [image] [image] You're welcome.