I will say, it might be worth while to add the new web GUI as rclone serve http_new or something. The one that is there right now is slim for quick and dirty with minimal resource requirements – on both the front and back end.

I made a proof of concept react app to do this. I’m not a frontend developer so it has been hard work for me!

Here is a question: how should we deal with static assets?

For example, we may have a file called “styles.css”, and normally, that might be served via /static/styles.css. However, this would make it impossible for a user to browse a folder named /static (!!)

Here are some options:

If it were me, I would probably choose option 1, or possibly option 2, or option 5. But maybe you have an idea for a solution I haven’t thought of, or a tradeoff that you’d find acceptable.

Here is a question: how should we deal with static assets?

A good question indeed! I was thinking that we could use a special directory like @rclonestatic@ and keep them all in there.

Another way of sorting this out would be to use a parameter string so append ?rclone=static to each URL and get the URL handler to separate them. This would have the advantage that there would be no namespace collision.

I’m not keen on options 2-4 and 5 would indeed make life more complicated. The URL parameter idea is probably the best one as it is “out of band” and all the URLs should be generated by us.

I like the URL parameter idea (?rclone=static) - didn’t even think of doing something like that. Will take that direction. Thanks!

Okay, I have a work in progress branch that I would love your feedback on, if you have time. I’ve added the ability to:

This is important because, when we want to add even more features (yay!) to the GUI, we won’t be limited to the fields which are currently in the serve.DirEntry data structure.

Here is a preview:

And here is my branch thus far: https://github.com/ncw/rclone/pull/2874

Does this seem like it’s going in a direction that make sense?

Does this seem like it’s going in a direction that make sense?

I added some comments on the pull request.

This seems rather interesting - how’s the progress?

I’ve been trying to use rc and rcd to create an interface to monitor jobs running on a NAS box.

What I haven’t found yet is a way to obtain -P(rogress) like information. Any ideas how to do it?
something like job/progress ???

What I haven’t found yet is a way to obtain -P(rogress) like information. Any ideas how to do it?
something like job/progress ???

You can use core/stats which should have most things in!

I really missed it. Thanks. I was looking for something related to job/xxxx.

How does it work when more than one job is running (if I understand correctly you could run more than on job, right?).

How does it work when more than one job is running (if I understand correctly you could run more than on job, right?).

You’ll get combined stats for all the jobs I think. I’ve not tried it actually!

ll get combined stats for all the jobs I think. I’ve not tried it actually!

May I suggest adding a job Id to each of the file being transfered? And setting the job passed on the command line as jobid=0 or 1 (in case the command is no rcd)?

This would make the creation of a API based GUI much simpler and consistent.

Also, is there a way to get info like: total size of the job (in bytes), number of files to be transfered, etc. To display progress information much like -P does?

Many thanks once again.

I’ve written (and updated) a quick and dirty JavaScript (around 300 lines now) that display a sync job running on one of my NAS boxes. It’s a framework, with room for a lot of improvement (specially in formatting), but does the job nicely, specially for long jobs (like initializing a large backup).

Bellow is a snapshot of the simple screen. I do not intend to make a complete GUI to configure rclone or setup/start jobs, but good enough to allow monitoring multiple jobs running on different hosts, with some graphic progress information and allow changing some parameters on the fly (other than bandwidth) for performance tuning (if it works). All files are statick HTML/CSS/JS and can be serverd by rclone, so no backend required.

If anyone is interested, I can upload to github. 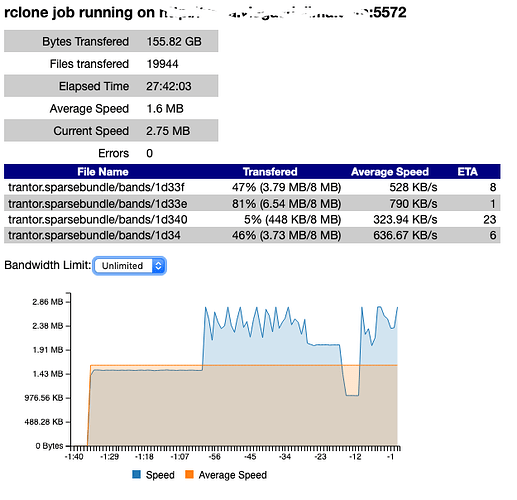 I wouldn’t mind using something like this from a browser behind caddy on my remote vps. It would be nice to have something to monitor jobs that way. And drill to the log (potentially increase verbosity of it on the fly with RC).

If anyone is interested, I can upload to github.

That looks very interesting - I would like to see it please

Will finish some changes (to make it simpler to configure) and will upload to github.

I’ve just added rcloneMon to GitHub! It’s a web based remote monitor for rclone jobs (running with Remote Control enabled). It will display progress and statistics about, including progress bars and bandwidth usage over time. [rclone_screen] Check it on GitHub:

Hello! I have not made too much progress on this, for two reasons:

My apologies for the delay here! No ETA on my end, but thought I’d drop in and let you know what is happening with me!

Congratulations!
See you soon for news about your web-based GUI.