100+ percents of copying on last release

files are copying over 100%

I think this happens with retries. If you use -vv you will see rclone doing the retries.

I've seen something similar, usually with very small files, where it can often go to 130-140% for a split-second before finishing. (not exactly the same as OP with his large files which I have not experienced).

I just assumed it was some artifact of the progress-calculation algorithm due to overhead or packet-sizes or something, so I've just been ignoring it since everything seems to be working fine otherwise.

I've fairly certain this phenomenon has not been tied to any spesific version as I remember seeing it several times when testing IOPS performance over several months.

Again, this may not be directly the same issue as the OP experienced, but I figured I'd mention it for being related.

Retries... Last week I did about 2 Tb with no these retries, the same source and remote using 1.49.2 (but with annoying "file already closed" errors).
Now I have 258% total and the process is still on despite all the files are on remote.
I hope it will end some time or other...

As NCW said, if you turn on -vv you should be able to see if this is the case (and what is causing the retries).

Because if you are getting more than 50% retries (to reach 200% or more) then that is not normal in any case and it should be investigated. Feel free to post the debug log here and we will help analyze what the underlying problem is.

To turn on -vv I need to start a new process. I still hope the current transfer will succeed so will be waiting a bit more... until 300% for example.
Also I'm thinking to get back to good old 1.49.2.

Just started a new upload with -vv. With no issues yet. Will let you know if something go the same way.

After that I checked the files and they're ok.

What does it mean?

If you use -vv you will see rclone doing the retries.

Debug output, or "very verbose" if you prefer to think that way.
It makes rclone spam your output with every little thing it does. Way too much to absorb real-time - but crucial to figure out what is happening under the hood if you suspect problems.

Can I copy files from local to encrypted mount via explorer.exe?

Still on the subject of retries on opendrive want to report 1.50.1 I installed today don't fix this bug.
Please take a look to the screenshots. As you can see 5 files was uploaded successfully but they are still uploading over 100%. The only way to stop them is to Ctrl'C Rclone. So I have to wait until the last of 16 files will have been uploaded and then stop. It's very sad because all this time I will waste traffic and time to upload already uploaded files. And I don't know how to fix it 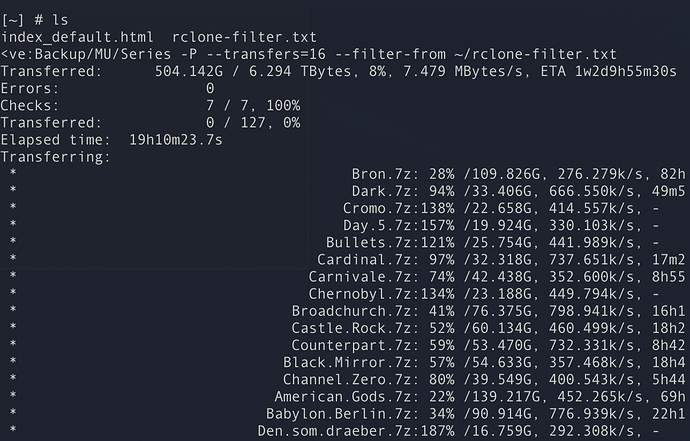 Still on the subject of retries on opendrive want to report 1.50.1 I installed today don't fix this bug.
Please take a look to the screenshots. As you can see 5 files was uploaded successfully but they are still uploading over 100%.

I think rclone will be retrying failed uploads, hence that is why it has uploaded > 100%

They are not actually failed. They were checked ok. Also I downloaded several and unzipped them. They are absolutely ok. But RCLONE for some strange reason didn’t receive an successful upload message or smth about.

As a follow-up... I’ve been monitoring RCLONE upload to OpenDrive for two months and wanna mention:

Maybe it’s time to fix it?

Delighted to fix a bug if we can work out what is going on!

The first start would be a log with -vv.

Ok. I have to wait until my files have been uploaded and then I will start a new upload with --vv. Where should I send a log?