Slow start times for films through a Union.

If I navigate and open a movie on Union (H:)
-Movies on Local (or both locations) start in seconds.
-Movies on Drive open in circa 20 seconds

By comparison movies opened in Drive/mount (G:) open in circa 8 seconds (quicker if in VFS-cache i.e. on subsequent plays).

G: is mounted with BAT file:

Pastebin.com is the number one paste tool since 2002. Pastebin is a website where you can store text online for a set period of time.

hi,
--allow-other does nothing on windows, as per the docs and debug log

--allow-other does nothing on windows, as per the docs and debug log

Been meaning to take that out!

Added it when I added the "--dir-cache-time 30s" as I wasn't sure if that went to Memory or disk. I'm assuming Memory?

I've removed both and still get the same result.

yeah, can be confusing, take a read of my post
https://forum.rclone.org/t/status-about-using-rclone-for-music-storage-playback-in-2021-access-times-improved/27648/34

I think I've found a culprit!

I just left a video playing (made a brew) came back and reopened it and boom instant playback. Used Wiztree to see actual data size in the sparse files and 2GB was the magic number for instant playback.

When I take the whole line out I'm down to load times that are on PAR with the drive mounted directly. (8'ish seconds first play. And near instant start for subsequent plays)

not sure that should be the case,
rclone uses chunked reading and playback should start quickly. 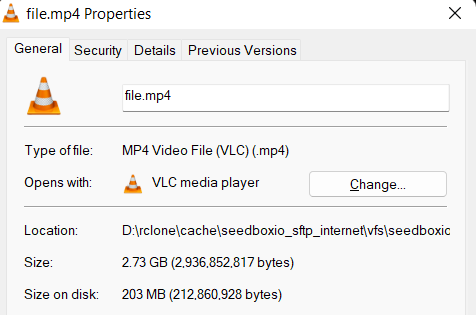 It's starts in that time if it's I'm in the VFS mount (G: in my case), but from the UNION it is looking like it's that line.
-I've tested it by looking at the size on disk of the file (in the cache folder) if I set the read-ahead greater than that size it opens slowly, if I set it under it open's instantly. Just tested on 10 files.
-If I remove the line completely it functions as normal.

Have to be honest I copied that line (--vfs-read-ahead 2G) from @Animosity022 . Do I understand it correctly that by taking it out, my vfs cache is now just writing what it's using? so I'm a little more susceptible to network issues?

Got to do the school run, but I'll recreate the error and post some clean log files later.

That would be analogous to my setup though:

In both cases --vfs-read-ahead isn't part of the Union/ mergerfs. Just in my case it seems to be messing with the Union.

thanks but i was/am hoping that @Animosity022 would see that and reply to my question
and might know why, in your case, --vfs-read-ahead is causing an issue.

The only thing vfs-read-ahead does is if you are sequentially reading a file, it'll continue to read further along until the file is closed. It doesn't impact streaming start time or not. I think I was testing it before I moved away from GDrive but I will probably just remove it as it's not really needed and with cache mode full, doesn't add a whole lot of value imo.

Thanks both for weighing in. I'll mark the comment to remove "--vfs-read-ahead" as the answer for now then.

If you think its a bug do you want me to recreate and do some fresh logs? Happy to if it helps, let me know.

I don't use Windows myself so not sure offhand.

It's working fine for me on the mount. It's only when I access that mount though a Union it's causing an issue with slow video start.

The logs I posted originally were for the Union Mount. Logs from the Drive Mount when I a) play the file through the mount (no issue) b) through the Union (Slow Start)

In both cases I'm navigating via Windows Explorer and opening with VLC.

Only if you're curious.. It's working without the flag, so I'm happy enough

The Cache option when you create the Union in Rclone Config:

What is being cached? Is it separate to the vfs cache and --dir-cache-time?

best to start a new topic, fill out the template and ask your question