Time to copy 1TB from DropBox to GoogleDrive

Just as an anecdotal data point, it’s taken me about 3 days so for to copy 700GB from DropBox to GoogleDrive.

I spun up a Vultr VPS to run it on, figuring it would be a lot faster than running it from home, but at this rate I’m not sure how much time it’s saving.

I guess it’s possible there are options I haven’t tweaked, until I research that more I’m assuming the issue is mostly rate limiting.

Kind of sucks because i’m trying to close my dropbox account before 12/31 to avoid a renewal fee.

should not take more than a couple hours really… a lot of small files?

I spun up a Vultr VPS to run it on

What are the specs of the Vultr VPS you are using?

@seuffert Well, over 400k files. Is that a lot? I wasn’t thinking so because it still comes out to over 2MB per file, unless my napkin math is wrong.

@TowerBR It’s a small one, $10/month. Cheapest one that supports 2TB of bandwidth. Not sure if that makes a difference or not, I did monitor the CPU usage periodically and it was always below 50%.

Fwiw it’s still going actually, looks like the average transfer rate has been about 26Mb/s, which is lower than benchmarks I’ve seen from vultr. 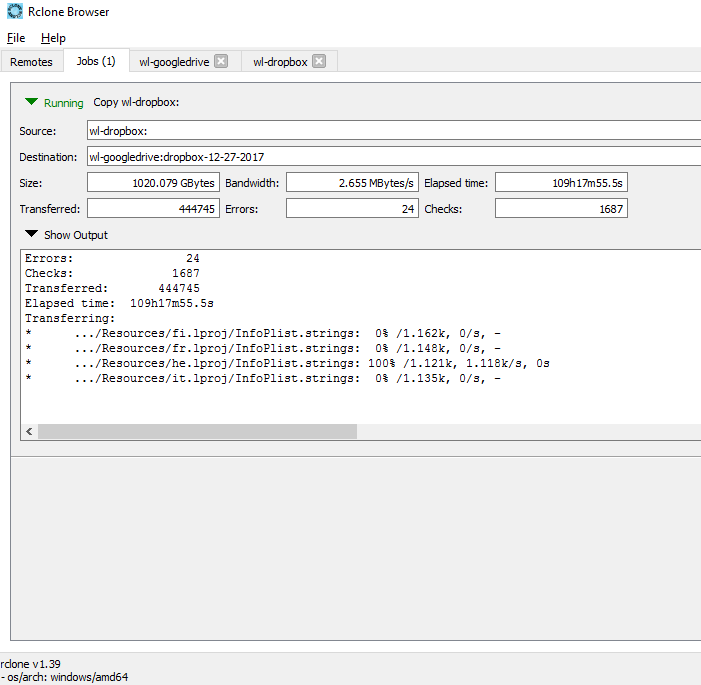 I just use multcloud when I have to copy from one cloud to another.

@whitneyland on small vps instances (like google micro) i had to find a good balance between --transfers and --buffer-size to stay within ram limits and prevent swapping. once the system starts swapping, transfer speed goes way down. with 400k of small files, you will probably need more transfers with less buffer and equal number of checkers

Maybe the problem was the restriction of Dropbox for downloads.