Struggles with getting onedrive mounted on Windows

Hi there, I wanted to get rclone as a way to have my onedrive purely in the cloud vs. saving a copy to my PC.
I have been trying to get it to mount on startup, first using a windows scheduler which was super annoying to have the cmd running all the time.
Instead I saw nssm as a good solution, but I can not get it to actually work. Ofc I am adding the correct path, but under arguments it seems everyone has a different suggestion. To just get onedrive working I can do "rclone mount one-drive: Z:" for example. But putting just mount one-drive: Z: as the argument does not work. Neither does adding in the -vfs stuff or adding in the -config? Which idk if its a problem, but my config file seems to have been put in my appdata folder?
After each attempt, I try to go under services to manually start it to see if it was successful.

Any advice would be appreciated, thanks!

windows scheduler which was super annoying to have the cmd running all the time.

i use task scheduler, to run rclone mount command, always works, never had issues.
and easy to run any task, using the command line or script.

fwiw, never would try to run rclone.exe mount.
with task scheduler or nssm, always execute a .cmd batch file,
and the .cmd file will run the actual rclone mount

so, is the issue that the command prompt windows stays open?
there are workarounds for that

Thanks for the help, yeah the problem is just that it stays open. So in task scheduler you mean to suggest selecting cmd as a the program and make the argument rclone mount?

the problem is just that it stays open

could try
--no-console Hide console window (supported on Windows only)

and when i use task scheduler, nssm, autohotkey, etc, to run command hidden all the time.
to run a task
C:\Windows\System32\schtasks.exe /run /tn "rclone\cloud.daily"

and to create a windows desktop shortcut or desktop icon,
create a shortcut lnk 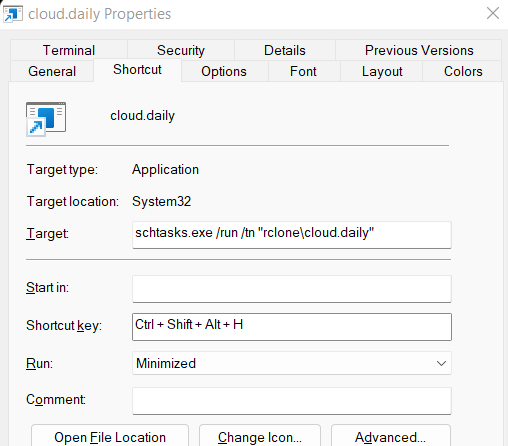 Which idk if its a problem, but my config file seems to have been put in my appdata folder?

are you asking about location of the rclone config file?

Ah wow thank your for your detailed response!
For the config file I was just wondering if that was screwing something up, as it seems to have been put in appdata vs. .config.

Regarding your advice, I made a .bat file which just contains rclone mount one-drive: Z: and I set auto scheduler to run it. This works vs. selecting the rclone.exe and adding the mounting as an argument. Though I end up at the same place with cmd running when I logon in order to keep the drive connected. To hide the cmd screen, do you mean put "--no-console Hide console window" in the argument line of the task scheduler?

Ahhh thanks! haha otherwise what ended up just now working too is making a vbs script, that points to the .bat file which has the mount.