Hello, I apologize in advance for being stupid 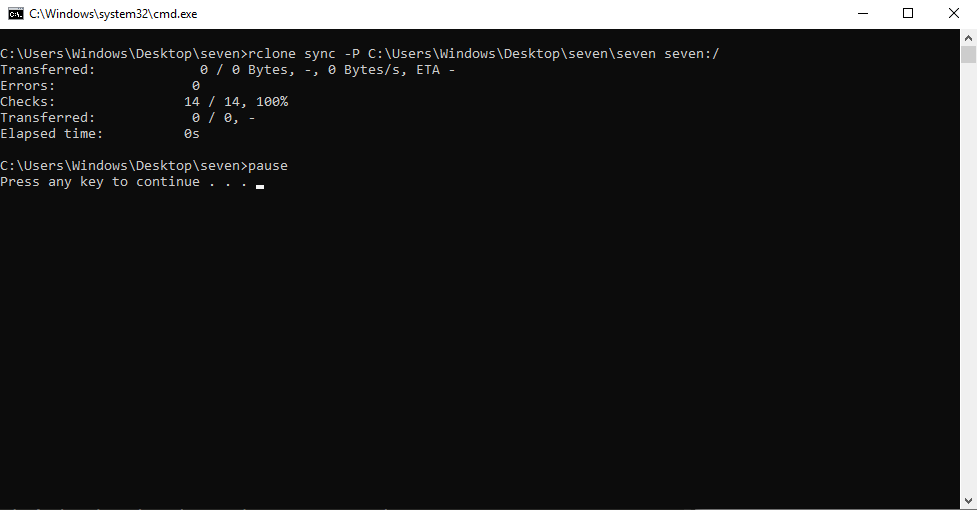 test.sh (this doesn't work for me)

What you want to do?

I suck at bash but something like this should work as a replacement:

small question, what is the most used/best solution for filtering/multiple folders?
in my directory "seven" on linux I have 15 folders but only 3 of them, I want to synchronize.
should I list them all as individual commands, or can I list them in one sync command?

No, that synatx will not be valid. rclone needs 1 source and 1 destination

There's a few ways to handle it.
The primitive way would be to just make 3 sync commands after each other in the script - one for each folder.

This will work fine for this case since it's not very complex what you are trying to do here. (only 3 locations - and full sync of everything in them)

Second you can use rclone filtering system:
https://rclone.org/filtering/
then you would do something like

In plain english that means: start the sync operation in the /home folder, but only work on the folders that start with "seven" (seven*) and all the files inside, including subfolders (/**)

Note that I have not tested these examples - they may have minor errors in them in sytax, but you should get the gist of it.

That is sufficient for your need here, but if you want to do really complicated filtering that you can't easily put into a single command you can also create a layered filtering file if need be (see the linked docs). What is the "best" way depends on the complexity - and also to an extent what you find to be the most intuitive to understand. If you have never used regular expressions (for the filtering) that might require a little bit of study to grasp.

If you are ever in dobut and don't want to mess up (because a sync can delete files if accidentally run with wrong settings) I highly recommend you do a trial-run by adding --dry-run to your command(s). This will simulate the sync but do no actions, letting you see what is going to happen. Especially if you also add --verbose (or just -v for short) so that it tells you all the files and folders it would transfer.