Is there anything I can adjust in the Plex setting or rclone mount cache settings to get better streams? Tried to watch a pair of Remuxe, about 40 Mbps. Then Plex buffers several times… 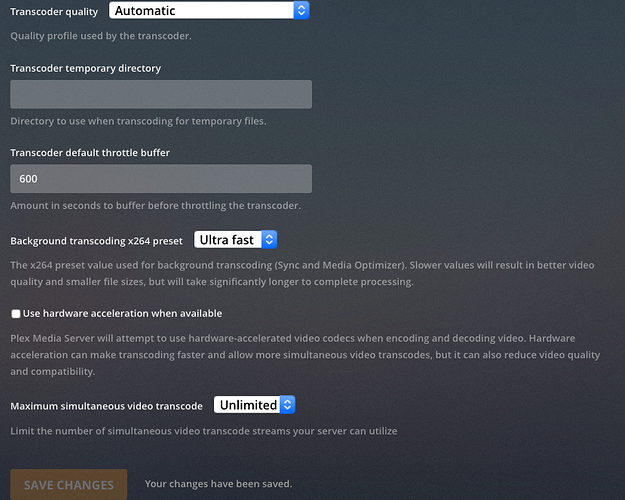 I have a 50 MB line and everything connected by cable…I know that the bitrate is only a reference point and that it can double. But somewhere must be my bottleneck or there must be something you can do better. I tried the same files from another user and they ran without buffers.

Furthermore I read that you could speed up some things if I put the databases into RAM. Would that make sense at 16GB? If so, how do I do it?

Maybe someone of you can help me

Are you playing directly from the mount?

I would not use the cache and see how that works for you.

50Mbit could cause trouble with a 40Mbit file. The bitrate is an average of the whole file. So during peak moments in the movie you could go up to 50-60Mbit/s. This can cause trouble.

I’m aware of the peak times. However, the other server where I tried it had exactly the same file with the same bitrate and also a 1GB/s line. That’s why I ask yes. Shouldn’t I have gotten the same buffer problems?

wouldn’t I be in danger of being banned? Have a 40+TB library with correspondingly many files

I’ve been using the vfs backend now for some time. My library:

I have 110TB in my Drive, shouldnt be a problem.

I had some issues with a specific Linux kernel few weeks ago which caused slow download speeds at server side. Which kernel do you use?

Also, was the server hosted at the same data center?

Server is in Netherlands, bytesized, and my Client is in Germany

I don’t think it is related to the kernel in this case.

Could you do some speedtests at the server to see if it can archieve full speeds?

If he’s got only a 50Mb/s line and he’s trying to play high bitrate movies, it’s going to buffer when it hits peaks and such. Can’t fix that other than reducing the bitrate via limiting in Plex so it doesn’t exhaust his download speed.

Only thing that is a little bit weird is that he’s telling that on another server but on the same 50mbit line he can play the file without problems.

Could it be a difference between using the cache backend vs the vfs backend? Cache caches the chunks locally while vfs just reads it from gdrive into memory and sends it to the client. Are the specs and settings of rclone the same on both servers?

It was the difference between cache and vfs. I was using it wrong

Can you elaborate? Reading back you used cache before. Can I presume you using the vfs backend now?

yes I used cache before. Now using vfs like animosity022 and all streams smooth