I'm trying to set up onedrive in Linux Mint Mate 19.3. Every thing looks as expected until it gets to this section:

I entered the address that the above link went too, appears bad, I'm not sure what to do here?

No clue what to do here!

Is there a particular reason you are using the beta? Can you try with the stable?

In Debian/Ubuntu based distributions use:

I followed the instructions in an online It's FOSS article, " How to Use Microsoft OneDrive in Linux With Rclone Open-Source Tool". How do I get the stable version? The version shown in the Linux Mint Software Manager is 1.36-3. Should I be using that one?

dowload it from here.
https://rclone.org/downloads/

Excellent, thank you very much! However, couple of other questions if you don't mind:

Obviously I don't do this kind of stuff very often so any questions or advice you can offer will be greatly appreciated. So my thanks to both you and to Animosity022.

as i never use beta software, i was not sure how to answer your question, so i did a test.

then i ran the script to install the stable
curl https://rclone.org/install.sh | sudo bash

whichever script you run, it removes the current rclone and install a new copy.

I didn't use either one of those, didn't know anything about them. I used:

That's from an It's Foss internet article, "How to Use Microsoft OneDrive in Linux With Rclone Open-Source Tool" that found and followed. It is a legitimate script because I've used it before to install other programs in Linux but apparently here it defaults to the beta version. I wii give the stable version a try asap. Thanks again for all of your help!

that Foss is just another of many lame articles about rclone.

the fact that he suggests sudo apt install rclone makes it clear he does not know what he is writing about, at least about rclone.

Yes,moved it from Wikipedia page.

not sure exactly what mean?

The Its FOSS article was referenced on the rclone wikipedia page with that advice. Now it is not.

Just fyi, but here's an interesting twist! As noted earlier, rclone version indicates the installed version is v1.54.0-beta. However the attached screenshot shows Linux thinks its the older 1.36-3 version, the one that would been downloaded from Linux Software Manager! I suppose that by using the install command in the It's Foss article:

that it just defaults to what ever version is available in one of the multitude of Linux software sources. I'm not sure what if anything that might mean, in any case I will be installing a new version as we discussed. 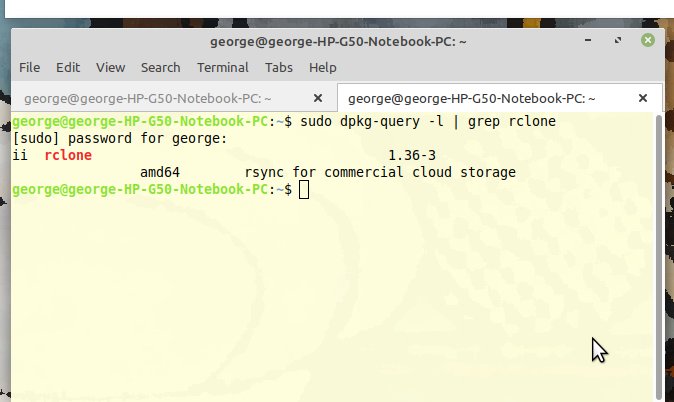 You shouldn't use the package manager to install rclone as they are not maintained by rclone and all dependent on whoever created the package to maintain it.

You want to use https://rclone.org/install/ and always grab from there.

Appears I've got rclone & onedrive set up and working as expected so my thanks to all helped, it's greatly appreciated!