Rclone mount commands are confusing as hell;please help an absolute beginner to set this up

Hello! So, I’ve been trying to get this to work on my dedicated server (which is rootless) that had rclone installed and configured
But it’s just really confusing
how do I set up a very basic mount?
there’s tons of different guides and set ups and I just want to make a simple setup with an encrypted google drive

all the mount page says:
rclone mount remote:path/to/files /path/to/local/mount to set up a basic command but all I get is it failing when it tries to set up a mount
for google drive would this be
rclone mount googledrive:/ /Home/user/mountfolder ???

for google drive would this be
rclone mount googledrive:/ /Home/user/mountfolder ???

If your remote is indeed called “googledrive” (see rclone listremotes if you are not sure what your remote is called), the correct command to mount the root of that remote as a local directory under your home directory would be something like that:

(note that mountfolder has to exist already, if it doesn’t, just create it: mkdir ~/mountfolder).

Is it normal for rclone to “freeze” up during ssh?
I can’t do anything for now after using the mount command 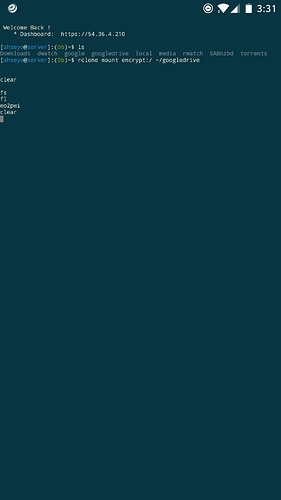 This is normal: rclone mount keeps on running while the remote is mounted. I suggest you leave it running on that window/shell session/whatever and open another one to do whatever you want to do with the mount; that way, you can refer back to that window to see eventual errors rclone mount has encontered, etc.

If you don’t want to open another window/session, you can run rclone mount on the background by appending an & at the end of the command, ie rclone mount [...] &