Just hoping to draw upon some brain power here in the forum. I just set up a fresh VPS and have running some tests.
My rclone mount settings are
/usr/sbin/rclone mount --allow-other --read-only --max-read-ahead=2G --acd-templink-threshold=0 --dir-cache-time=60m --checkers=32 --timeout=30s --contimeout=15s --retries=3 --low-level-retries=1 --s$

I will load up plex in a Firefox browser to test… after a brief buffering period it will start to stream (direct play). At the bottom of the screen there is a bar that represents the time the file has been playing and a grey bar typically advances infront of it that i assume represents the content pre-stream/Download to allow for smooth playback.

Now at seemingly random points Firefox browser will stop playing and display “There was an error in play back” or something to that effect. I know the file is fine as I have watched it locally just fine. So I dig through the Plex logs for an entry around the same time as the video fails… and I get this type of entry below:

Now I never ran into this issue with my last VPS with the same rclone mount settings.

Anyone have any clue as to what could be happening?

I’ll give it a shot and run some streams to see if they randomly drop. I’ll report back in a bit.

ps: I’ve checked out your scripts site… great work. Say how do you organize your media on ACD? Do you just have Movies and Shows like most folks… or do you sub-divide Movies into different categories and if so… how do you maintain those sub categories? I can figure it out manually, but automating the process has me stumped at the moment.

Do you just have Movies and Shows like most folks

I only have subfolders movies and series, all other organizing within them iam sorting with Plex labels.

I got an inexplicable set of buffering on MP4 files via direct play with no transcoding... then the web browser dropped the playback. I checked the logs and it referred again to a 'broken pipe'.

My dedicated machine is :

That should have more than enough power to stream a freaking video thats not being transcoded.

What does 'broken pipe' actually mean? It seems to have something to do with an interruption in the Plex playback stream.

As to 'labels', I will look into that. On my local machine I would have just made a series of Directories such as Movies-Action, or Movies-Documentary... then using the Plex interface, I could navigate to the folder I wanted at the time. I'll look into Plex Labels.

As to ‘labels’, I will look into that

Thats why i love labels you just go to movies and in filters choose what label you want.

btw Plex search do support genre eg if you type in search Action it will offer you:

( this does not have anything to do with labels, but its important you then select in Library ALL not recently uploaded/release as then it wont show you all action movies ) 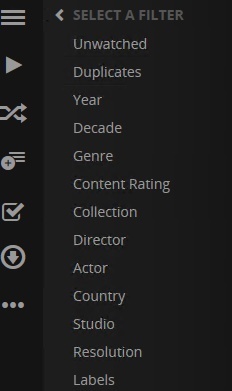 p.s. Label are great as they are public eg all your users can filter on them. Like I had Christmas movies etc…

How fast can you download that MP4 file via rclone copy? Maybe your peering to ACD is bad?

I made small script to test copy speed, it will show you current and average rate

Hrm,
Thats a good point Stokkes. To be honest I dont know even how to test that.
Just checked a little lower in the thread and it looks like Ajki made me a bash script.
I’ll check it out.

Ajki,
You are awesome. I will chmod +x that script and toss it in my script directory and give it a whirl.
I’ve sent some beer money your way for all your friendly advice/help, from the link on your site.
Cheers.