For those tracking at https://plexguide.com, we replaced ST2 with PGBlitz. With PGBlitz, multiple service accounts are used to bypass the 750GB daily upload limit. Every service account enables 750GB+ more per day. We want to thank @flickerrate for the original ST1 and ST2. PGBlitz is far simpler and deploys PGDrives. RClone has come so far and has enabled all of this. A nightmare to code the thing, but many of us are enjoying our awesome plex servers. PGBlitz is far simpler and less complicated and built for PG.
Thank you! 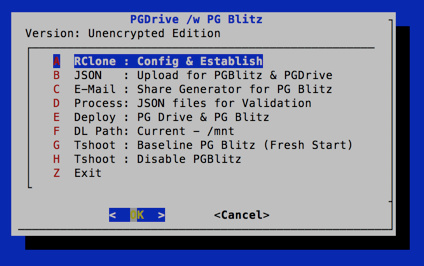 Before anything, just wanted to say I appreciate the work and effort you and others have put into your site and for sharing with the community.

It seems stuff like this or a method created to bypass imposed limits set by the provider are a great way of abusing the only widely available/affordable service. I assume eventually stuff like this and other ‘workarounds’ will bring on further/more strict limitations to the service.

Just my opinion, not that its worth anything.

It seems stuff like this or a method created to bypass imposed limits set by the provider are a great way of abusing the only widely available/affordable service. I assume eventually stuff like this and other ‘workarounds’ will bring on further/more strict limitations to the service.

This! We can upload almost 1TB a day and all this for 10 bucks a month and it still isn’t enough?!

Don’t get this wrong @gforce, you PG project is great for all users, especially for the beginners but we should stay inside the (generous) rules Google imposes.

@gforce, I completely agree with the others. While your project is nice when it works, I think you are pushing the boundaries of acceptable use of gdrive. This will only lead to bad things for our community. If you wish to keep doing so then please keep this within your sphere and not publicly discuss things like this that will impact us all. We will blame you and your project if you end up making us lose the only acceptable provider out there. Its an irresponsible attempt to circumvent the rules that Google put in place.

I can agree it is very bad practice to abuse a service in such a way, I however can not share the same “happy feelings” about this project. It hardly works and the admin9705 is very rude to everybody not kissing his ass, no lick == insta ban. He talks a big game about donating to 3rd party projects, but little more then talking happens.

PS: @gforce, please remove suitarr from your money grab project, people no longer need a “space saver” option if you are screwing Google in multiple ways.

I share the concern that Google may one day revise their policies. I do not however share the angry, non-constructive tone of some of the replies.

@hotio and @RXWatcher should at least acknowledge that they are contributors/supporters of a ‘competing’ project (although the idea of competing in this open-source/hobby space is kind of silly). Hotio in particular is constantly harassing and sniping at the PG project without ever actually offering anything constructive. The side-swipes and implicit criticisms of PG from CB supporters is just childish – both projects offer something interesting, and users choose one or the other because it meets their needs.

Secondly, being offended by someone creating a workaround using existing tools (GDSA’s in this case) is somewhat laughable in a space where a huge amount of the content is of questionable origin to start. You are saying PGBlitz is bad, but everything else that is done is totally okay? Be serious.

Finally, the outrage at PGBlitz and insinuation that it is a “money grab” is the height of hypocrisy from a CB project that actively promotes and supports another workaround, ZJ, that costs $25/mo and uses exactly the same infrastructure (albeit via a different method/channel).

In closing, a reminder of rclone forum rules:

Welcome to rclone forum — thanks for contributing!

Does your reply improve the conversation in some way?

Be kind to your fellow community members.

Constructive criticism is welcome, but criticize ideas, not people.

Dear @Lex, I’m not a cloudbox contributor and I did not mention cloudbox on purpose to not be accused of promoting it. It is however a fact that most stuff of plexguide is a copy/paste from cloudbox. The ‘anger’ towards admin9705 is understanable, given the attitude and disrespect admin9705 has given me, sadly you are in no capacity to know this, because he deletes everything.

PS: why mention rclone rules, when you are violating them too? Is this another admin9705 alt account?

I’m also not constantly harassing the plexguide project, I only asked that admin9705 removed my docker containers after he offering it himself, he however did not expect I would take him up on his offer. After this I got banned from everywhere and it still isn’t removed.

@Lex you should really know why this stuff happens…just about every person not agreeing with admin or voicing any concern gets banned. Educate yourself before voicing a made up story from your beloved admin

PS: I think it is safe to say that nobody is trying to compete with plexguide, that would be hilarious

hotio, I know you man. Seen you for ages, and talked to you a number of times. I saw your exchanges with Admin and others on PG, CB and other forums. I’ve seen quite a few people banned on CB & PG for a lot less.

You do great work. But you do neither yourself nor anyone else a favor by pissing on other people or their projects. I understand your anger, but you have to let it go.

I am trying to be constructive, but you may be right - I may be violating both #1 and #3 in the guidelines. Peace, man. I’m out.

postscript: Sorry, didn’t mean to say you were a contributor at CB. RX is, and a great one. The reference to you is a ‘supporter’ … as in, like many people, you sometimes hang out on their discord and contribute useful ideas.

I would have been just as happy to be a plexguide supporter if he didn’t take a dump on my head for his own mistakes, but whatever, it is what it is.

Legit question, why on earth are we even talking about all of this stuff on the rclone forum? What’s the reason to spam all this plexguide propaganda on this forum? They have nothing to do with eachother, or is there a pgrclone in the making?

Let’s try to keep things on the topic of rclone and civil please.

Apologies. I’ll delete if it helps to unclutter things.

Deleting stuff would only create more clutter and alter the story line, that’s the entire problem I was making you aware of. @gforce keeps deleting stuff and banning people for the smallest of things so nobody has any clue what’s going on.

But enough about him or pg, we should be more focused on rclone only stuff on this forum.