How to rclone touch all files?

How can I rclone touch many files - for example all in a given folder? I'm trying to fix some modtimes that got corrupted by a bug at some point.

touching a single file is no problem, however...
rclone touch F:\modtimefix\1KFILES -t "2000-01-01T00:00:01"
results in an access denied for some reason. I am not exactly sure what that refers to (must be something other than the files), but I expect something simple in my syntax here is wrong.

EDIT: adding -C (don't create new files) fixed whatever it was trying to access - but then it just finishes with 0 actions taken, so that wasn't all that helpful...

(No files touched without their explicit consent... I just want to gently fondle a lot of them at once is what I'm sayin' hurr hurrr

rclone touch only deals with one file at once at the moment - it can't take a list of files.

Maybe with a flag it could do all files in the directory that you give it (or --files-from etc). This would be reasonably easy to add and is the way a lot of rclone commands work. Perhaps that should even be the default if you supply the -C flag.

Aha! Well no wonder I was having problems then. I was starting to suspect that.

I think I'll just have to script it then. I think I have something almost done for powerscript. I'll post it here when done in case anyone else finds it useful.

It is probably most efficent to mount the remote then use rclone touch on the files in the mount.

i am not powershell user but i know that with cmd, be default, dir will not see hidden and system files.

and if you do screw yourself, post the pics, please!

The best thing I could come up with in the end was:
Get-ChildItem -Force F:\MODFIX * -recurse | ForEach-Object{$_.LastWriteTime = Get-Date}

Very much a hassle, but in my case it's just a couple hundred GB so it's doable.

Maybe there would be room in the future for a rclone touchall that takes a directory rather than a file (and has a recursive option). @ncw

let's say that the local source = c:\folder\
and the remote is gdrive:bucket\

in a loop for each local file, you need two variables

Yea, I see where you are going with that, and that would probably wok fine.
But I'm starting to lose focus now and I've tested the above powershell code to work fine (locally) so I'll just do it the stupid way this time around as I'm not in a rush.

But I do appreciate your input as always tip hat

i was able to

Via mount you mean? Yea I did try that - and it ran, but nothing seemed to happen.
you didn't have vfs-cache-mode writes on for that test did you? I assumed that wouldn't matter...

Mmm, tried again - but no luck.
I assume you used some other method of setting the modtime right? I have no clue how powershell functions honestly, so I assumed it's probably just due to winfsp NTFS emulation not being that perfect.

i use doublecommander instead of windows explorer.
it has a way to change file attributes 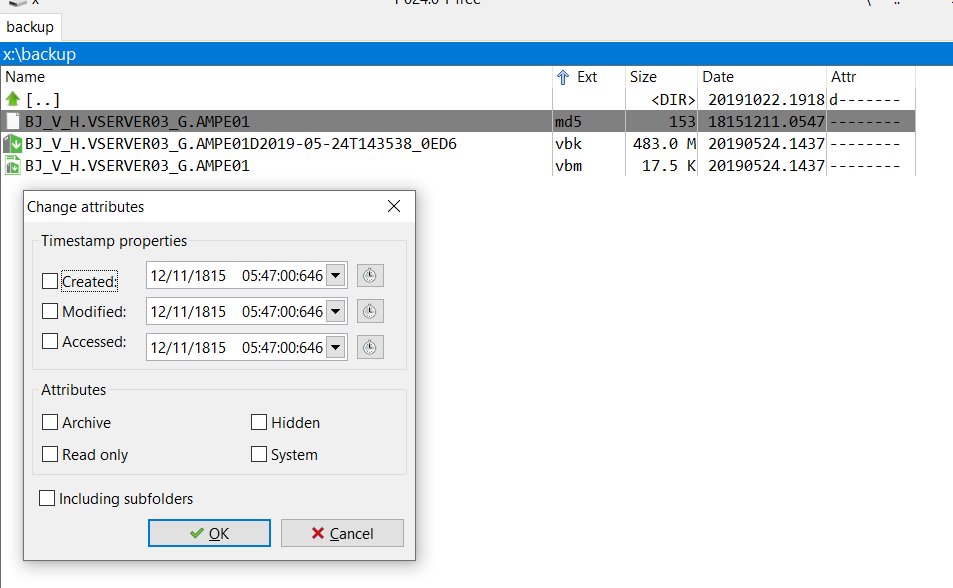 Oh... well since it has a "including subfolders" option that might work then. I'll test that

Place the following two lines in a Windows .bat file, edit the folder paths as appropriate making sure both lines reference the same path. Leave --no-create asis as insurance !
Leave the double-quotes intact. It ensures that paths and file names containing spaces will be handled correctly by the batch file.
You can remove --max-age 1y if it's not appropriate to your requirements.
I've used this batch file many times on many different folders to touch thousands of files.
bn: is my GoogleDrive

weclome to the forum.
thanks for the suggestion.

That looks pretty sweet. Probably both fast and robust, using rclone and being outside of mount as well.
I've already saved it for later use, thanks!
Now I know who to bother when I need help on my batch scripts