So i have large collection of movies and series which i would like to place on some cloud,
would like to watch them in streaming mode from owncloud webdav, using rclone mount crypted on vps.
Whats better for that google drive with unlimited space or amazon cloud drive?
for speeds, streaming, etc ?

Not my use case so I can’t really help you with your question, but this part got me curious:

Whats better for that google drive with unlimited space

“Google Drive with unlimited space”? Where have you seen such a beast? On Google Drive’s available plans page at https://support.google.com/drive/answer/2375123 there’s no such option…

He’s refering to G Suite which has unlimited

He’s refering to G Suite which has unlimited

Ah, thanks for the info. I can see it here: https://gsuite.google.com/
So it would be $5/user, plus $5 for the unlimited storage option = $10/mo = $120/yr. Exactly twice as expensive as Amazon Cloud Drive (that is, if GSuite can be had for a single user), but it also adds a lot of additional services (business email, etc), so for those that need these services, probably it´s worth the cost…

I’m using G Suite which I think when you as you say take into consideration the additional services its well worth it, also Google Drive seem’s to have a lot less issues unlike ACD

I agree if one needs to receive email under "@particulardomain.com" or somesuch instead of "@gmail.com", because AFAIK except for that, these services are pretty much the same that can be had for free under the Google Apps (Sheet, Docs, Drive, etc) plus GMail, no?

Now that’s interesting. Perhaps I should do some testing on my end… Can you tell whether Google offers a trial period like Amazon or anything similar?

Yes thats true, you can get thoes for free up to 15 GB (which I already exceeded and your bound to @gmail.com which in my case wasn’t optimal)

I’m sure he knows how much is costs. He was asking about speeds and streaming, not costs and other features. Maybe this will answer your question:

Thanks for that info. I just checked an old academic account I had around, and lo! It has unlimited GD storage for free. Hard to beat! Doing some testing right now, as noted on the rclone Google Drive page it has a really hard throttle on the number of files per second one can upload (seeing about 1.5 so far, which sucks when one has a few millions of them to deal with) but otherwise it seems pretty decent…

Google Drive is currently better than any other cloud storage service available in the market.

I hope you find this useful

Google Drive is currently better than any other cloud storage service available in the market.

Depends for what, atm if you have big Plex media library forget about using gdrive as your account will get locked for 24h and every library scan.

Performance wise from Hetnzer host Amazo Drive is around 30% faster compared to google, but that depends on peering so it could be different elsewhere.

My upload speed to Amazon Drive is averaging 80MB now.

Google main disadvantage is 24h auto locks on to many API requests that Amazon Drive does not have.
The biggest advantage is ability to copy files larger then 50GB, upload/download and file access speeds are on pair and its mainly depended on your ISP.

My suggestion would be to open Amazon Drive account as its FREE for 90 DAYS so you can test and decide which one works better from your ISP:

Once i hit a bit less then 20TB library ( and more or less all my movies are from 8GB to 20GB, and series 3GB+ ) I could not use gdrive anymore due locks.

Isn’t this some kind of scam? I ask that because, except for academic (".edu" and the like) accounts, Google Drive costs at least $10 per month, ie $120/year (and that as part of the GSuite promo, individual accounts, while the above page promises an unlimited account for just $15 lifetime (ie, one payment).

In fact, it seems that there were ebay scams not too long ago promising the same thing: https://www.reddit.com/r/DataHoarder/comments/47cln1/til_you_can_buy_an_unlimited_google_drive_account/

The warning in the above Reddit post, that whoever is (re)selling you the account, be it legitimately or not, would have full access to your data (unless encrypted, of course, but even then they could just remove it all at any time), is indeed something to consider.

I would recommend anyone going on that path to be very, very careful…

Isn’t this some kind of scam?

I would also like to know that. Just giving $15 and getting unlimited cloud storage for a lifetime seems ridiculous cheap.

You probably get a .edu account with unlimited Google Drive storage. I got one on eBay a while back to test and it worked well, except access to it was removed after a couple of months. You probably run the same risk here.

Hmm if it’s only for a year then the price makes sense. I contacted with them and will let you know. 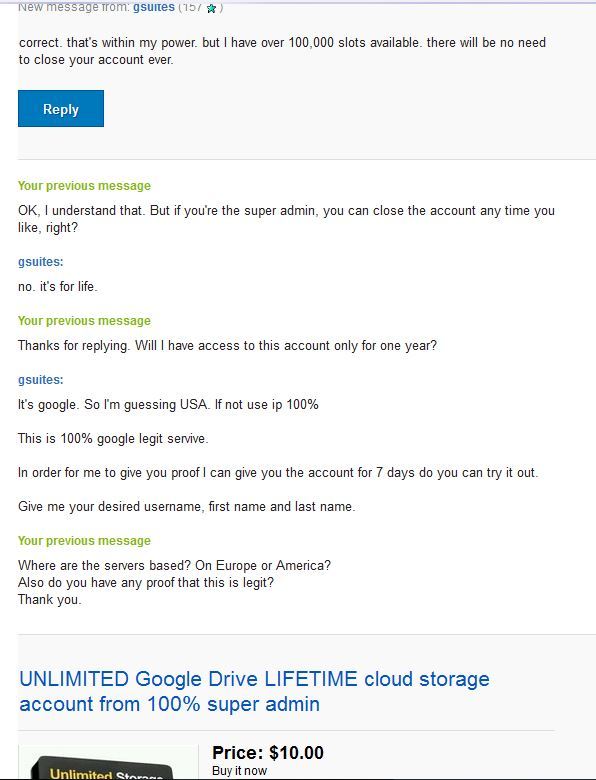 If you get unlimited google from ebay then rather aim for EDU accounts.
You have school admins who are making some money on side since its 0 cost for schools to open new accounts.

The business accounts are payable monthly like it was already mention so its more then likely they will open your account and close it after a week or two.

It’s from the guy I contacted with who seems he doesn’t really give a fuck about closing accounts, since he has -as he said- 100K slots.
Anyway I will let you know if anything happens to my account. I will only have it to backup my primary ACD. 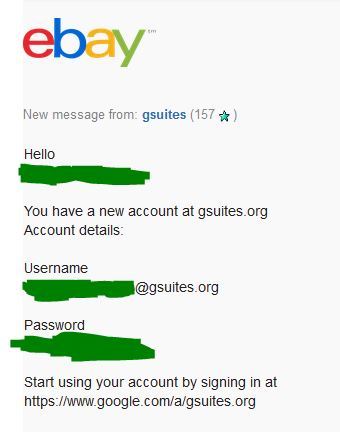 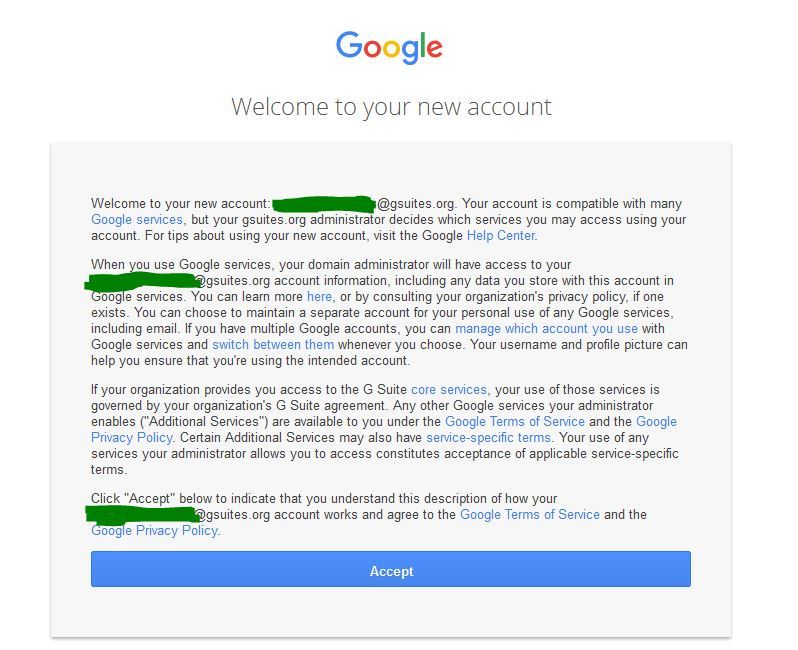 good luck and keep us updated.

p.s. I hope its not meant for main library.

p.s. I hope its not meant for main library.

I will just backup my ACD files with encryption.
Apparently he can do whatever he wants with my account, but at least he won’t be able to read any of my files 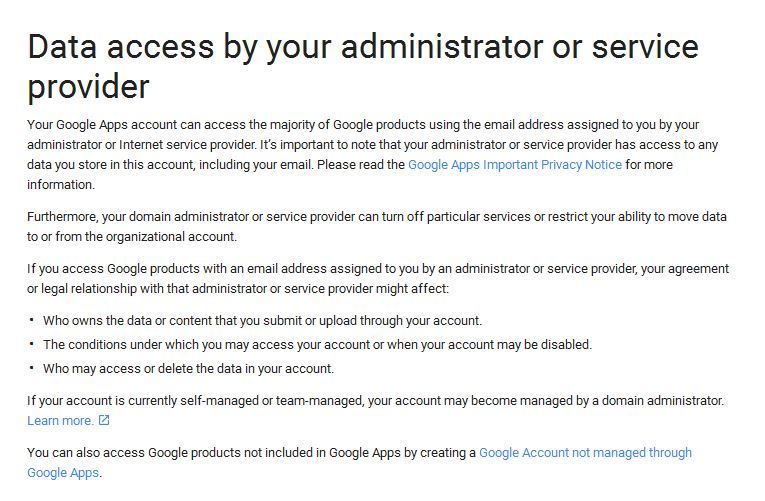