Hi, I have a file tree that essentially looks like this: 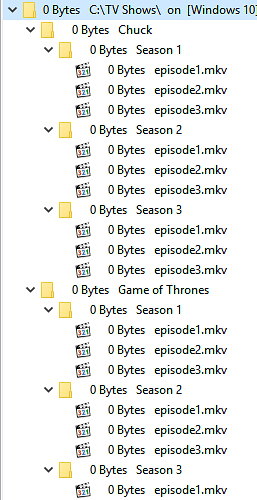 And it excludes the folder Chuck and all subfolders and subfiles successfully which is what I want.

But I will be adding a lot of rules and need to use the exclude-from file.

So I made a excludetv.txt file and put a single line of the exact same pattern in the file: “Chuck/**”

Then I use --exclude-from /root/rclone/excludetv.txt to my command and it doesn’t work at all, nothing gets excluded.

Search is your friend

Can't get --exclude to work question

Hi, Sorry for asking this but I've been banging my head against the wall for a few hours. I'm creating a nightly backup script to backup my Plex folder and want to exclude some folders but no matter what syntax I try, the folders I want to exclude always get copied over. Here's my command (using latest beta): rclone sync /home/stokkes/appdata/plex acd:Backups/Apps/plex --exclude="transcode" In the plex folder there is a transcode folder that I don't want to sync. This folder keeps getting …

Basically, if you’re syncing TV Shows, you need to do something like --exclude="/Chuck/**"

I have --exclude working just fine.

What is not working is when i put the exclude pattern in a file and use --exclude-from. It no longer works…

Or at least a subset of your file?

My exclude file has a single line: “Chuck/**”

The exact same string pattern that works if i use --exclude

I’ll add more lines to my file after i can at least get it to work with 1 pattern.

Can you try adding a forward slash / to see if it makes a difference?

And the example provided does not include quotes in the string. Maybe try that?

How can I put Season 1, etc in my exclude file. I only want to exclude specific shows.

I’ll remove the quotes, but remember, it works if i use --exclude, just not when i put the exact same string in a file.

The example I provided was just an example

To answer your question, I’m thinking the exclude file can’t include quotes. The quotes are used on the command line due to bash/other shells and ensuring you’re encapsulating the text correctly.

The file may not have that limitation if rclone is pulling it in directly. In fact, the quotes in the file may confuse it if it’s not expecting it.

You are right about the quotes. It’s working now from the file with multiple shows. Even shows with spaces in the name are working as long as I don’t use quotes at all.

I figured I was just doing something simple wrong.