When running RClone with the following command:

You can see in my screenshot here 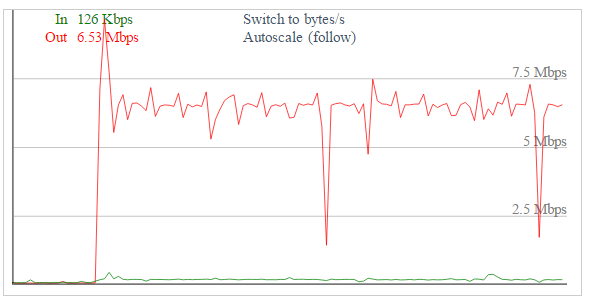 That the bandwidth usage is far exceeding the limit I had placed in the command for rclone.

I am using FreeBSD 11.0 and RClone 1.36 pushing data to a Backblaze B2 remote with crypt.

The bwlimit is in Bytes not Bits.

Oh, yep. Too early I guess. I’d file an issue on github as it works ok on Ubuntu from my testing.

Maybe the decimal isn’t translating too.

Could try 300k and if that does the same thing.

300k was my first attempt, . 3M was more of a last ditch effort. Right now rclone consumes so much bandwidth that my network completely shuts down when it runs.

32 Transfers is specified because I use the same script for everything. The folder I’m transferring only has 1 file in it, so I’m not sure if the 32 transfers are even doing anything. With 1 file I would think only 1 transfer would ever be active?

If I put in 10M and do 4 transfers (default), I’m not seeing 40M used. I see it split evenly between my 4 connections:

It doesn’t seem to be per transfer.

I’ve confirmed setting it to 11k makes its bandwidth usage not even noticeable. So some form of bandwidth limiting is working. I’m going to experiment a bit and see what I can find.

Dang it, got it mixed up with mount buffer, which is per connection. Sorry for that

I’ve submitted an issue on this problem. I guess we’ll see what we can find out from there.