maybe 10 is too much. maybe the region you provisioned your instance in.
i am running europe-west1-c

Your upload method to google drive is what? is this also using odrive? and if so what is the proper way to do this just mv the amazon folder to the google folder and sync?

Not sure what the right US location is if your ACD is in the US located as well. I’m now getting lower speeds too though, probably just per file based since it looks like it already fetched the larger files.

I’m not yet uploading to G-Drive, will try rclone first. Not sure what the right way would be with odrive, will let you know how I did it when all my data is downloaded to the GCE instance.

Can someone point me to the guide to using odrive to sync between ACD and gdrive on Linux? I have 30tb I need to get off of ACD.

If someone else needs to migrate to gdrive from acd. How to migrate 15TB ACD to GSUITE (with only the GSUITE cost) I am transfering at 55-137MB/s! average: ~120MB/s [image] First Step: Get G Suite Account signed up for G Suite trial. skipped setup assistant. added my domain via domain verification. upgraded to G Suite Business (8$ p month) (still on trial though!

) Second Step: Get Google Compute Account You get 300$ to spend for free on signup!+ Register for free 300$ a…

What kind of speeds are you getting with this method?

speeds seems to have picked up now:

So, my transfer finally finished after ~28 hours. I decided to not copy my Arq back-up’s as that was another 5TB. I did a re-run of the command I used before to be sure nothing was missed but it looks like it already downloaded everything. (no .cloud files anymore).

I’m now copying to G-Drive with the following command, I’m starting with the folder called Films so I can see if everything goes smoothly before I transfer the other stuff:

I’ve used a custom client_id and client_secret because I would need it later for plexdrive anyway.
Speeds are very nice Avg: 1.27 GBit/s. Should be done tomorrow evening I hope

(got some tv show catching up to do than!) After that, it’s time to request a refund from Amazon…

What do you mean by your own client id, you did this with Google drive?

Can someone please help me with the 2TB limit on the VM? I have a business account and I upgraded to a paid account when prompted. For some reason no matter what size I select when setting it up, sda1 maxes out at 2TB when I check via ssh. Am I doing something wrong when creating the VM? Any advice is much appreciated. 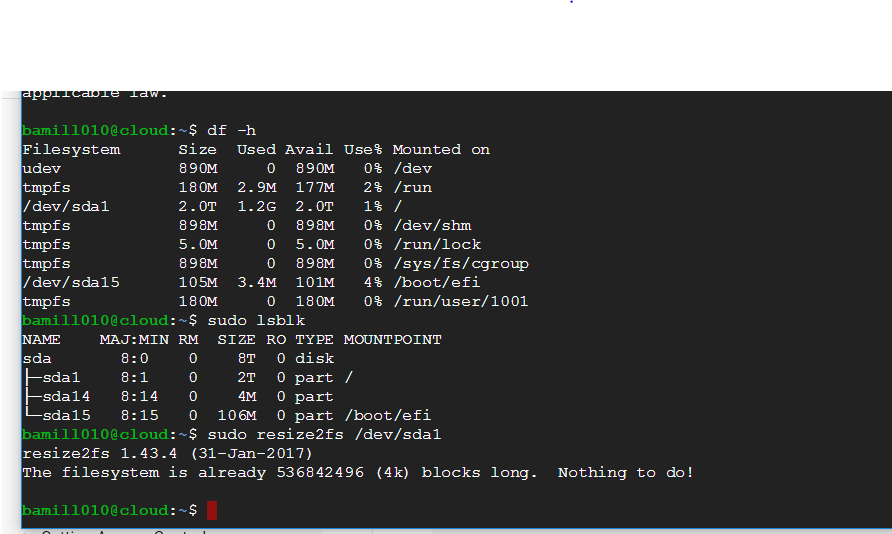 You need to add the second drive so use the 10gb for the os and create another disk as 10240GB after you add it to the vm when it boots you need to format and mount the disk. To get over the 10tb you need to request an increase from the quota page

Never mind figured it out.

I notice noone here has discussed the main issue stopping me currently. As I’m trying to use netdrive to download my encrypted acd locally, I am getting issues that file path is too long. I am using Windows 10 and removed the file character limitations and reformatted the drive to EX FAT. This has not solved my issue. any ideas other than the google server?

Not sure about netdrive, can't help you, why don't you just use odrive, works on windows the move is the same as everything else, download to local, upload to cloud no matter how you do it, and so far the fastest has been the google server. If you are doing this on your home server depending on how fast your connection is, could take you months to download. so you may want to buy a subscription to odrive for the 100/yr.

I couldn’t get rclone to work. i think it doesn’t like network drives or how Expandrive mounts them. I would just mount both ACD and Gdrive within Expandrive and copy with Windows copy. There are other tools to copy but this seems to be working ok at 60MB/s.

i can not create a disk over 10TB but i have request +15000GB and confirm this. I repeat this request and google confirm this again.
In the confirm mail is a link “To verify the quota change, please navigate to”… this site is the quota site and i see the quoats but i can not change anything i see ony the % for the services.
What i overlook ???

I have a sync question, i want to sync one folder called “Movies” from “ACD:/crypt/Movies” and not all folders from ACD. Can someone tell me the command to sync the folger “Movies” please.

And thank you for the support, infos, instruction here

If you use odrive, first let it sync all the folder structure and than start the sync itself. I’ve used this command to sync my media folder: