No space left when copying millions of file in local

My problem is not really related to rclone I think but I wondered if someone had this problem ?

After some millions of files, I had an error message with no space left although there was enough space. I searched on internet and found maybe it was related to the number of inodes and increased it to 240M.
But after 30 millions files, I still got those error messages and the copy stops or slows
Anyone had similar experience?

Basically all the stuff in the question template 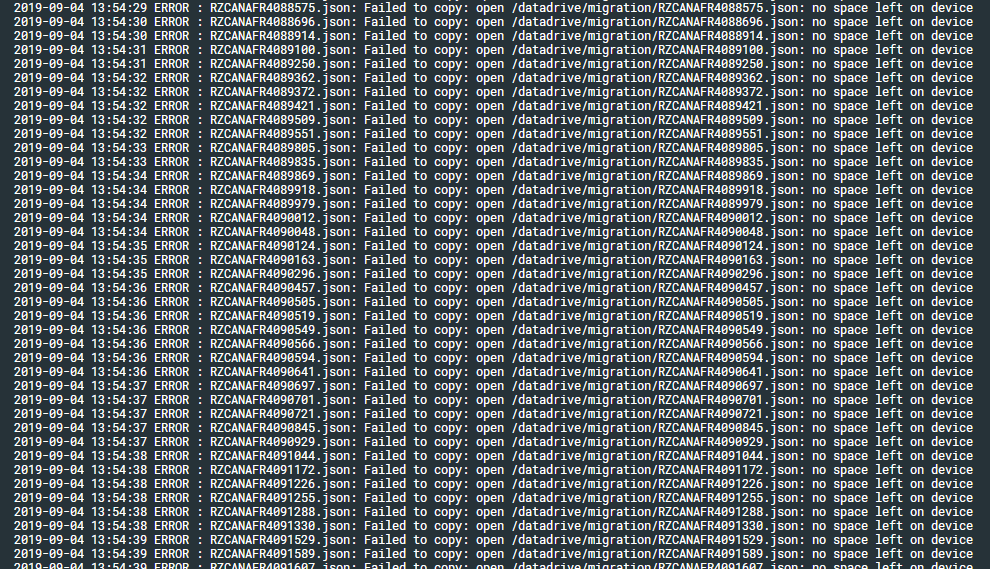 What's the backend for that?

Can you link the full log to something as well as that's just a snippet?

That does look very much like there is no space on device being reported from the destination.

I wonder if the destination directory is full?

Which file system are you using?

How many files do you have immediately in the directory /datadrive/migration?

When attaching the drive to the VM, I increased the number of inodes with this command
sudo mkfs -t ext4 -N 250000000 /dev/sdc1

My original need is that I have 96 millions of small files on blob storage and I want
to append them in one single file or multiple files with fixed sized.
I thought to transfer it in local with rclone
I copy them in one folder to make sure that all files were copied

I think it's more a limitation of the file system , number of files per folder and/or inodes
but I would like a confirmation if someone already did this ?

According to my reading you can have an unlimited number of files in an ext4 directory.

It might be worth doing sudo dumpe2fs -h /dev/sdc1 and posting that to see if there is anything we can see in there (once the disk appears to be full).

Hi
Sorry was and still working on the problem

From my test I have this problem around 30M files in a folder and tested if I coud split the whole set in smaller set and copy them in multiple folders and it worked.

So what i'm doing now is run a copy with files starting with letter A and put them in folder A , B files in B folder and so on...

That seems consistent with your errors.

I'm confused though because I thought ext4 could have unlimited files per directory. Maybe unlimited means very large limited by something else in your machine...