New server for rclone with Plex - which CPU?

I’ve been using rclone with plex for maybe 18 months now, it’s been working really great.
Got API bans earlier and switched to rclone/Plexdrive set up (still encrypted with rclone) but recently switched to fully rclone with the cache.
No bans so far.

I’m planning to upgrade to a new server, and was wondering if you could help me choose.
They are basically identical, but one is a Xeon and one is an i7 CPU.
Which one would you pick?

I have maybe 3-4 concurrent streams going at most, and usually it’s just 1 stream.
Quick start of playback is a priority, and of course it should be able to handle at least 4 streams.

i7, it may be enough

What are you devices? it really depends if you are direct streaming/direct playing or transcoding.

The servers are the same price, so I’m only after the performance difference.
I would say I often need transcoding.

I stream to a combination of the devices below, the top 2 are used every day:
Tablet (transcoding)
Samsung smart TV (mostly direct play)
Mobile (android and iPhone)
Chromecast (not as often)
Older smart TV (transcoding)

I’d do the i7 as that’s what I have and I use hardware transcoding for almost everything if it needs it.

Hardware transcoding, are you referring to the Plex setting? 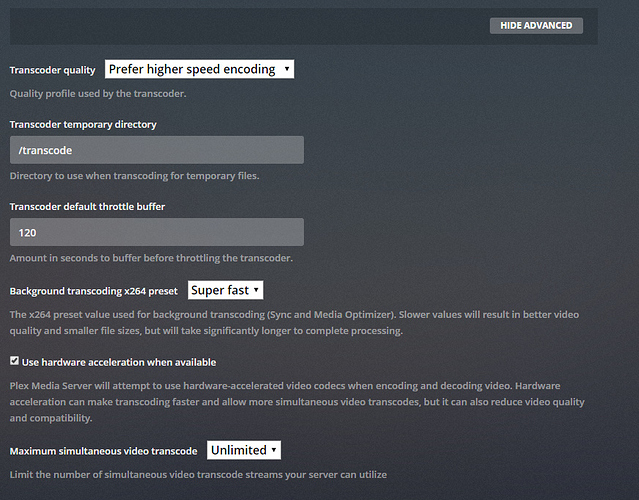 Yes, you have to click the box and if you play something that transcodes, you’ll see in Tautulli a (hw) at the end of the line to show it’s hardware transcoding.

You can also turn up the plex logs to debug and you’ll see it in the logs as well (first way is much easier).

Thanks for your help!

Can a Xeon CPU not do hardware transcoding, while an i7 can?
Because of built in graphics.

What do you think?

I went with the Intel® Xeon® CPU E5-2680 v3, it can handle multiple streams like a champ. Have you considered re-encoding media as it comes in to minimize transcoding and maximize direct play?

What I found was setting using H264 with a high profile at 4.1 and adding AAC stereo to the existing DTS track enabled 80% of devices to direct play. For older devices, you might want to use a main profile instead of high.

A project like , https://github.com/mdhiggins/sickbeard_mp4_automator , is very useful in normalizing your library.