I currently use rclone to write and for crypt but use Plex Drive to stream because of the Plex scanning issues that used to happen. I have heard this has since been solved. What are some of your rclone mount configs that you use for plex? Should i replace my rclone write with just 1 rclone write /read with vfs? thoughts? thanks!

I’ve tried to explain and document my settings here:

VFS is using a similar chunked download for files so you should not banned but it allows for a scaling size of the chunks so it can grow. dir-cache gives you directory/file name caching based on how long you configure. It basically removes the need to use the cache backend.

I use VFS and not the cache currently along with a script each night to move files from a unionfs/mergerfs type local staging area. I use Sonarr/Radarr/Plex/Emby all pointed to that union’ed mount point.

A couple questions that im not having the easiest time finding an answer to. Bad search mojo tonight most likely.

How often is the cache updated? If I add a new file, how long till it shows up?
Am I safe to do plexscans using your method? its been a while since i used rclone since im currently only using it for the crypt and plexdrive for everything else. Looking to switch.

Last time I did plex scans with rclone i would get api banned for 24 hours. is that the case anymore? also, whats the difference between rclone cache per se and the vfs?

The directory/file cache is updated ‘refreshed’ fully based on the dir-cache interval that you setup.

This works with the poll interval that checks for new changes and will cause the cache to be updated:

So the default is 1 minute from a copy.

I’ve been running Sonarr/Radarr (both have analyze off), Plex (Deep analysis off), Emby all on the same mount now for probably 4-5 weeks with VFS only and no issues with bans. The bans would occur before because of the “–vfs-read-chunk-size” missing as it would download entire files each time plex scanned as plex when it scans opens and closes files quickly, that would result it a ban for downloading too much.

Both --vfs-read-chunk-size and cache use chunks for reading and have some pluses and minuses. The start time and analyze seems to be better current with VFS so I’ve stuck with that.

My config is a GD with a crypted mount for my plex media as well.

Are sonarr/radarr scans as intensive as Plex’s deep analysis? i’ve got both on (20TB library) and I’ve had no problems.

To the best of my knowledge from trying to parse through Sonarr/Radarr, they run a mediainfo against the file to analyze it to validate what the file is in terms of quality.

I find that to unnecessary in my setup. That happens when libraries are added to either or if you import a lot of stuff into each app, it’s going to mediainfo all the files. If they are already there from before. No harm.

Plex ‘analyze’ is basically the same thing as it uses mediainfo/ffprobe to determine the codes and media info of the file so when you “Get Info” on a movie or tv show, it is populated. 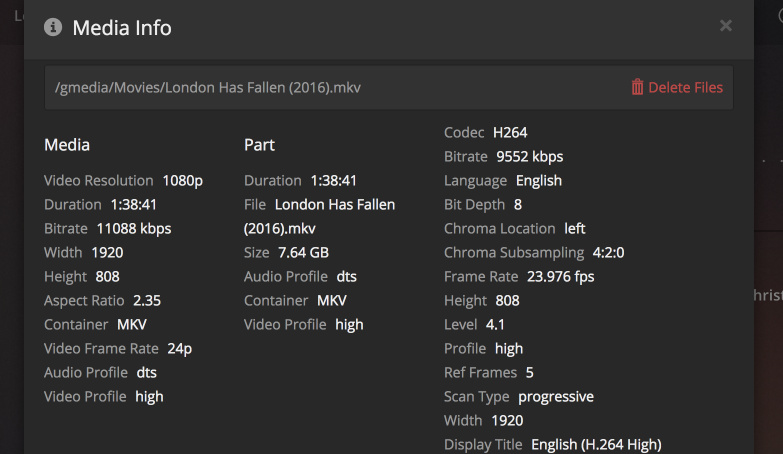 It also needs to know the file information to play a file so if you don’t analyze, it will analyze before playing it as it has to determine if it needs to direct play or direct stream or fully transcode it. In Plex, this normally happens when a file is added.

Plex Deep Analysis is different as that is used for bitrate limiting in Plex. It has to fully inspect a file from start to finish so it can get the maximum bitrates for streaming restrictions. This is normally turned on as a scheduled task, but I turn it off as I don’t use any bitrate limits.

Do you scan your library at a regular interval? Have you ever had issues with API bans? I believe I have my set to every 30 minutes with plexdrive.

It wouldn’t really matter how often you scan it. I let Sonarr/Radarr issue the scan once new media is added. I keep the scan interval at 2 hours just for fun.

Oh ok thanks, My media goes from a seedbox to gdrive so I cant really do the once added business. I use rclone directly from the box to gdrive. then sonarr only scans on a interval.

All of my content was added/processed into my library folders by sonarr/radarr, so that’s probably why I haven’t had any problems.

I’ve turned on plex extensive media analysis in my scheduled tasks tonight to see what happens… I’m hoping if I can get my current library done, then I won’t have any problems going forwards as Plex will probably analyse new content before it’s actually uploaded (I use unionfs).

Just trying to follow as to why you’d need bitrate analysis for folks on slow connections. They would just limit their streams to what they can actually serve and they can even use the automatic quality setting if they aren’t too tech savvy.

For limiting a remote connection for streaming quality, you’d need the actual bitrate analysis as without doing that, it just assumes average bitrate * 2.

This setting is global for the server:

You could setup to scan every 15 or 30 minutes. All those really just go against the items in cache/memory so no hits really occur.

My parents are set to 4Mbps - the deep analysis would let my server know that e.g. a movie with an average bitrate of 3.5Mbps would need transcoding because some bits are say much higher

If they are set to 4Mbs, it’ll transcode to 4Mbs, no analysis needed.

Not quite - if I have a 3Mbps file that peaks at 5Mbps in some places, then with the detailed analysis it can decide whether it can direct play or transcode per client.

An average 3Mb/s file is going to have higher than 4 Mb/s stuff as it’s an average so it’s going to transcode anyway. The deep analysis would just confirm that.

If they have 4Mb/s, you’d be getting into sub 1Mb/s files or something that really is sub 720p quailty to direct play it.

It’s like a unicorn, your use case would only hit on such rare media, it isn’t worth the effort to analyze an entire library for that.

If you want to limit folks bitrate for streaming, by all means, remote anlayze. If you want to ask your friends to only use x quality, make optimized media.

If you want to transcode without worry too much, use the HW transcoding as going through that will give you a huge bang for the buck if you have hardware that’s recent.

I download majority of 4k content for new movies and shows and I have people streaming them at 2-4Mb/s sec a minor CPU hit.