My streams seem much more stable on my new server, but I’ve got 2 questions;

Everything is slower when copying trough unionfs, iam getting flaky results as well. 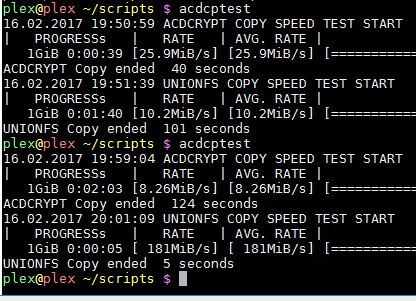 What about start up times for transferring files? There will be like a 40 second pause after your script downloads a few KB, then it’ll begin downloading fast. (This is with a 3.1GB file)

There will be like a 40 second pause after your script

Dunno for me i sometimes have that inital pause directly on acdcrypt and sometimes on unionfs, its some weird behavior from acd.

Regarding UnionFS speed… this may help, I’m still testing, add this to your Union FS mount options:

This changes the default read behaviour of unionfs from asynchronous to synchronous, which I bleieve it more in line with the way rclone works and the way Plex prepares its files for stremaing.

Iam also checking it with direct_io it seems it improves performance on file access.
Sometimes it can take 10 to 30 seconds before file is actually being copied ( copyspeedtest ) and since I was trying with direct_io i never encounter it … could be a fluke as it does not make sense.

You’re always on the bleeding edge I’ve been a bit out of the loop. I see there’s --buffer-size now are people using that?

rclone mount
–read-only
–allow-other
–acd-templink-threshold 0
–stats 10s
–buffer-size 1G
-v
–log-file=/home/plex/logs/mountacdcrypt.log
acdcrypt: $MPOINT &
Did not notice any difference with or without -v and logging the advantage with this info log is that you can tail with what speed if file getting transferred. eg
tail -f /home/plex/logs/mountacdcrypt.log | grep ETA

@toomuchio the max read ahead and checkers wont do anything so you can drop them.

auto_cache
This option enables automatic flushing of the data cache on
open(2). The cache will only be flushed if the modification time
or the size of the file has changed.

I installed node-gdrive-fuse with the changes for mtime and ctime. For some reason, I do not get valid ctime or mtime. When I do ls -lh, I see Jan 1, 1970 for the ctime for all files and folders.

I’m not sure why the fix didn’t work for me.

edit: nevermind. It looks like this issue was fixed in the latest snapshot so when I modified the files, I broke the mtime and ctime edits that were made elswhere.

Hey @Ajki, are you still pointing plex at your rclone mount directly to avoid the flakiness with fuse speeds or are you actually pointing plex to the fused directory now?

Hey @Ajki, are you still pointing plex at your rclone mount directly to avoid the flakiness with fuse speeds or are you actually pointing plex to the fused directory now?

Iam pointing it to fuse and it seems direct_io solved the flakiness with unionfs, the main problem is ACD and not really the fuse. I did several tests with local fuse and while read is almost on pair the write speed is a bit slower but still you will hit bandwith limit way before you hit that one. 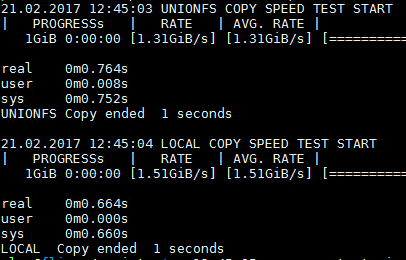 As for speed from ACD with or without fuse its more about amazon none consistent speeds then fuse it self.

Awesome, thank you for all your help and testing!

Hey, I have a few question regarding mounting with rclone.

If I try to mount with --buffer-size=1G I get an unknown flag error, rclone version 1.35 on Ubuntu. Is this only available in beta?

@Ajki: I’m in germany and have an Amazon US Account, is therer really an difference between the US and the DE Account speedwise? Therefore it would be better for me to make a switch?

Why the–read-only flag? Sonarr, Sub-Zero and Couchpotato aren’t working right with that

@Karl_Gustav yes there is speed difference since Amazon EU have datacenter in Ireland and .com in US. I also started with amazon.com but had around 50% worst performance compared to DE one.

If you are from Germany you should get amazon.de account.

As for buffer its only in beta and as for read-only you should use unionfs so everything copied into it its stored in other folder locally from which you upload with rclone.

Do you have any tips for my switch, approximately 8 TB to transfer? Could I just ask them to switch my account from US to DE? I won’t get blocked

Do you have any tips for my switch, approximately 8 TB to transfer? Could I just ask them to switch my account from US to DE? I won’t get blocked

You can migrate account but they will tell you that you need to move data on your own eg its better you open amazon.de drive with new email account and get 3 months free.

My suggestion would be to make that amazon.de acount add it to rclone as remote then get yourself cheap VPS on https://www.scaleway.com 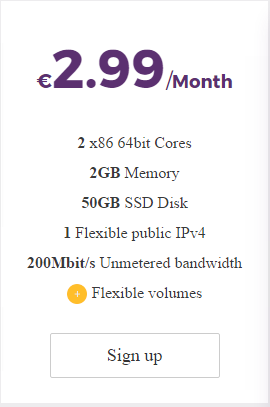 and put it incrontab -e

This will make sure that script would be run every minute, but dont worry it wont allow to instances at same time.
IMPORTANT. Sync remote drives directly and not secret/crypt ones.

Once all your files are synced ( 3 days top’s for 8TB ) just check the log, remove it from crontab and change the sync part with
/usr/bin/rclone check acdus: acdde: -v --log-file=/path/to log file/
Run it once and when its finished check the logs if all files are ok.

Now when you have everything synced open rclone.conf find entry with type = crypt and change remote = acdde:/myencryptedfiles ( just the remote part if it was acd now change it to the new registered remote )

And thats it you don’t need to change anything else.

A little off topic but has anyone looked into using https://github.com/trapexit/mergerfs instead of unionfs ? Seems like it has some pretty cool features. Probably helpful to those who have a primary SSD drive and a secondary SATA drive.

jtame said he is testing OverlayFS for it. 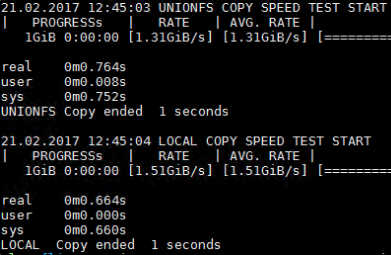 Only 0.10 sec difference for 1GB file and even that could easily be due some server task that triggered during that time.

p.s. Write speed should be slower