Amazon not unlimited any more

Amazon just became useless for media storage, once your current subscription expire you need to sign up for new plans: 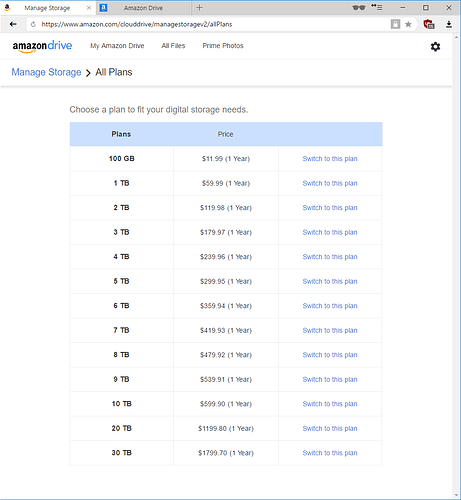 p.s. @ncw its all on you and rclone

I used rclone without encryption, it wasn’t mandatory to use it.

Yeah, storage is totally irrelevant at Amazon’s scale. Numbers aren’t available, but since a large portion of the Internet runs on S3, storage likely isn’t their issue. I’m putting my money on bandwidth too.

Your comment from huyuh is just wrong. Since you also have to upload the entire file for amazon to be able to see that it is a duplicate. Not rclone killed it, amazon just did not calculate on users mounting their media libraries from the cloud.

Or you have a mod from /r/datahoarder that for some odd reason stored 1.4PB of camgirls on Amazon.

I wish I was joking.

Do the math on that and figure in disks, redundancy and electricity and space and opportunity cost.

This is a sleazy bait-n-switch that Amazon just pulled. I joined a little over a year ago when they advertised unlimited storage. They knew their own capacity and had the resources to forecast usage demands. Now they tell us when they said unlimited storage for $60/year, they only intended it to mean 1TB?

they tell us when they said unlimited storage for $60/year, they only intended it to mean 1TB

“All good things must come to an end” seem to fit perfectly here.

And also API and I/O

Colour me surprised. Another “unlimited” provider turns out not to be unlimited after all. Most of us thought the price/service combination was untenable - I’m just glad I moved back to GDrive already and got my money back.

Just removed my credit card info for renewal and sent feedback. Dropping support for rClone was bad, but now that the price of my storage (~2TB of legit GoPro Video and Pictures) has doubled, that’s the push I need to find a better provider.

If you actually cancel your ACD account, they automatically refund you your remaining time (in my case, just shy of $30).

Unlimited just isn’t a real thing - everything has limits, and someone somewhere thought they could business model around it. Well, you can’t. This isn’t on rclone (or Plex, which is probably what in turn drove a lot of rclone traffic), this was just a flawed business model from the start that wasn’t going to last.

Unlimited just isn’t a real thing - everything has limits

true that, but then there is google for 8€ per month running unlimited clouds for ages where companies are storing PB of data

Not a completely unexpected development.

My hopes are that now Amazon are charging “enough” for the service, they will re-open the API and we can get rclone back on.

Comparing the prices of the other providers, Amazon are still quite cheap (same price as B2) and they don’t charge for transfers or operations.

Now if they just opened the API again so the people can migrate their files everything would be dandy. That’s the decent thing to do.

@ncw I love your demeanor. Despite Amazon making the choices they have made you continue to remain level headed. Nicely done.