so i did a little experiment to see what could cause a lockout.

The idea was using same config in more than one location(different ips)
this led me to find after using 2 locations for a while with same token and no lockout of the account. led to to try one more…
this lead to amazon cloud lockout which was easy to undo as calling is easy they did not say anything to unlock it.

So three ips using same config and then they locked ?

yes lockout automatic makes sense tbh id do same thing but id do it at one ip.

Been using 3+ IPs for over a month and no lock yet.

same config file and all using the mount?

They all 100% use the same config file. As for them all being mounted on all three I don’t do it any longer, only one of them currently uses the mount. Over the course of the last month I’ve gone through several different servers (10+) seeing what is going to work best for my needs, so there have been times where Amazon is mounted to many different servers all at once. I do however still use multiple servers for uploading downloads to ACD while using a separate one for Plex and haven’t been banned once.

well i did it with 2 in Germany and one in the USA, all mounted so all where connected at the same time. this is just what i noticed. and it was not a ban it was a lockout where all i had to do was contact them and it was unlocked. ban would mean you did something wrong.

idk if the size of the cloud mounted counts or what, my cloud is right now 19,2TB.

Hm, yea I’m not sure. When I did my initial testing my servers were all over the place. Right now I’ve got my Plex server in the USA, and my DL/UL machines are located in Germany and Amsterdam. I’ve currently got 40TB on ACD and as much as I’ve setup Plex on multiple machines I’m surprised I haven’t been banned just from scanning such large libraries over and over again. I could just be lucky or something. 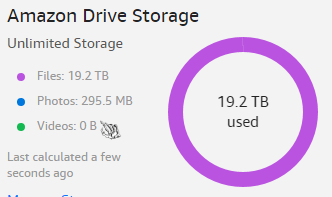 Wow, how big is your Movies folder? Also, I wonder if the ban is related to number of API calls? Would explain why you got banned scanner two at the same time.

movies are around 9TB
anime is around 800GB
and the shows are the rest.

I take it you do a lot of separate folders for your plex library ?

I only have two libraries at the moment, Movies and TV Shows.

I suspect its file accessed, on my download server Iam running cron every minute that rclone moves all download files + separate plex server.

The account locks stopped when i used --no-transverse as rclone did not always scan the whole library.
This is stats of my encrypted media library + subtitles

I also suggest you disable all Library refresh on Plex and just run it when you actually upload some files. I made some simple script that updates only the Library where I uploaded new stuff simply by running command bellow before the rclone move command
tree --prune -i -h -D /storage/media-local/ > /home/plex/rcloneque.log
to list whats in upload que ( while not listing anything if folders are empty )
and and then

if grep -q “series” /home/plex/rcloneque.log; then calling the library refresh
curl "http://xxxx:32400/library/sections/2/refresh?force=0&X-Plex-Token=xxxx
and same for movies.

Once rclone have file/folder local cache like acd_cli you will be able to prevent it even further.
This could work really well from multiple locations if we stored the local cashed database directly on mount and sync would be done only one one server while the rest of the servers would not sync at all, but just read the db.

I have it scan everyday due to the fact i have auto upload shows.

@dtech4you I scan it at least 5, 6 times daily but only after finished upload. A week ago I started to get locked on daily bases where 3 days in a row always at same time and then I implemented the above changes, no bans for a week now and I uploaded much more.